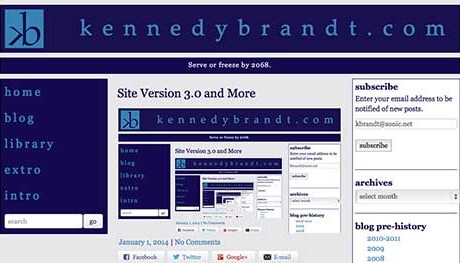 It’s almost three years overdue, but at long last I’ve finished the new version of my web site.  It was high time to ditch the dark layout, the ancient content, the eight-year-old iWeb app on which it was built, and the defunct MobileMe service that hosted it.

In its place is the new kennedybrandt.com, completely rebuilt on WordPress using the Ultimatum theme.  (WonderFoundry claims Ultimatum lets one develop web sites without any coding knowledge.  It’s partly true, but if you want to really customize, there’s no way around learning a bit of CSS and PHP.  Learning both of those is a good thing, so I’m not complaining.)

A few years ago, I blamed the death of my blogging habits on the rise of Facebook and Twitter.  The ability to fire off short, under-developed thoughts on a whim to an immediately-available audience was just too easy.  In hindsight, the other side of the story was that I really didn’t have the time, energy, or inspiration to write blog entries any more.

That has now changed.  I still don’t have the time, unless I further sacrifice sleep, but somehow I’m finding the energy, and the inspiration is back with a vengeance.  And that inspiration is what it’s really about.

The rise of e-publishing and self-publishing, and the success that a number of my writing friends have had with these channels in recent years, is both liberating and inspiring.  I’m still aiming for mass-market success through “traditional” publishing, but that avenue is fraught with disappointment, rejection, and compromise.  While I love writing for writing’s sake, the heavy odds against a new, unknown writer breaking through were becoming increasingly discouraging.  Even with a love of writing, it sapped my energy and it slowed my progress to a standstill.

Self-publishing/e-publishing present another way out.  I will continue to write stories the best that I possibly can, and in such a way that they’ll be as commercially viable as I can make them, but if I miss the mark, or an agent or editor just isn’t interested, it’s no longer a dead end.  I’ll just self-publish.  Amazon and Apple offer plenty of alternatives, and there are others that serve the hardcopy universe as well.  I still hope to get my multi-volume Human Ascension series published via traditional means, but either way, that series will be published.  The only question is whether or not I’ll end up doing it myself.

Knowing that is inspiring.  It’s liberating.  It’s an adrenaline shot to the writing heart and it has my creative gears turning again.  The writing has always been up to me.  Now, the publishing can be, too.

To kick things off, I’ve self-/e-published my first serious short story, Final Session, written at Orson Scott Card’s writing workshop in 2006, on this site.  You can find it in the Library to read or download.  Scott said he loved it, and he was certain it would be published.  Turns out, he was right — just seven or eight years early.

Happy New Year, and Thanks for reading.